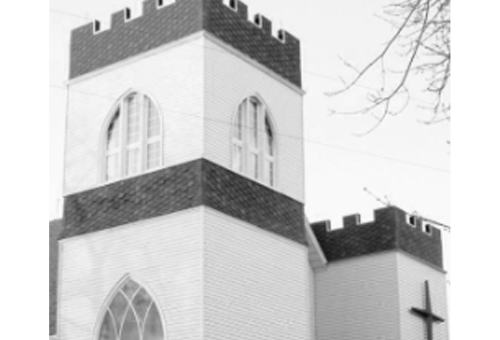 It was Sunday, October 17, 1920. It was Confirmation at Dalesburg Lutheran Church. The new towers and new basement had just been finished. The bell had been returned to its lofty perch. In April of that year, the previous single tower had been removed and Mr. Crane from Centerville had raised the remaining structure so that a basement could be added under the building. Gottfrid Anderson, a local carpenter was hired to lead the construction of the basement and to build two towers of different height in the front of the church. Volunteers – men and women – helped with the project throughout the year. Sunday Services were held at the Garfield Township Hall. Gottfrid Anderson left the project in September to go to Sweden. Herman Zetterlund and Nils Johnson were the leaders who finished the project.

On October 26-27, 1920 the congregation hosted a gathering of the Sioux Falls District.* At this gathering a new altar, a new pulpit, new altar chairs and electric lights supported by an electric generating plant were blessed.

The beginning of 1920 had seen the Pastor and his wife affected with influenza.

*Sioux Falls District of the Minnesota Conference of the Augustana Synod.