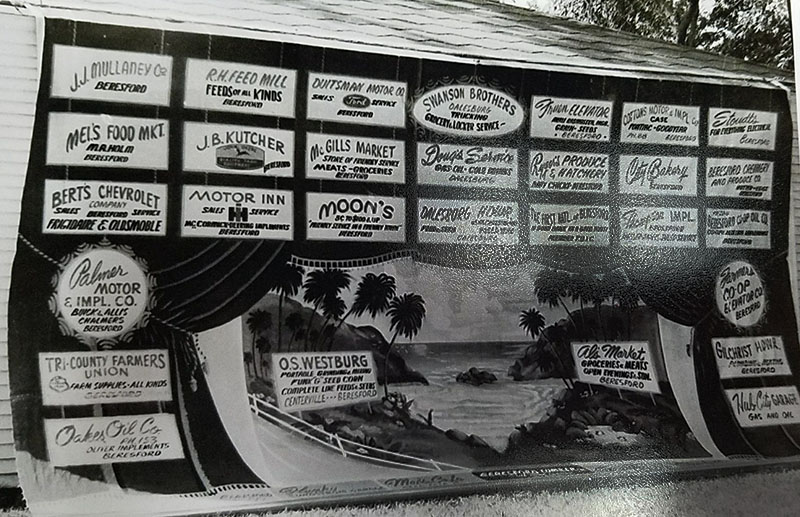 What Ever Happened To…

December 27, 2017 By command Comments are Off Announcements, homepage

What Ever Happened To…

The roll curtain that was in the west room at the Dalesburg (Country) School.

If you know what happened to it, or remember the last time you saw it, please contact Ron Johnson (ron@dalesburg.org) or Connie Richards. 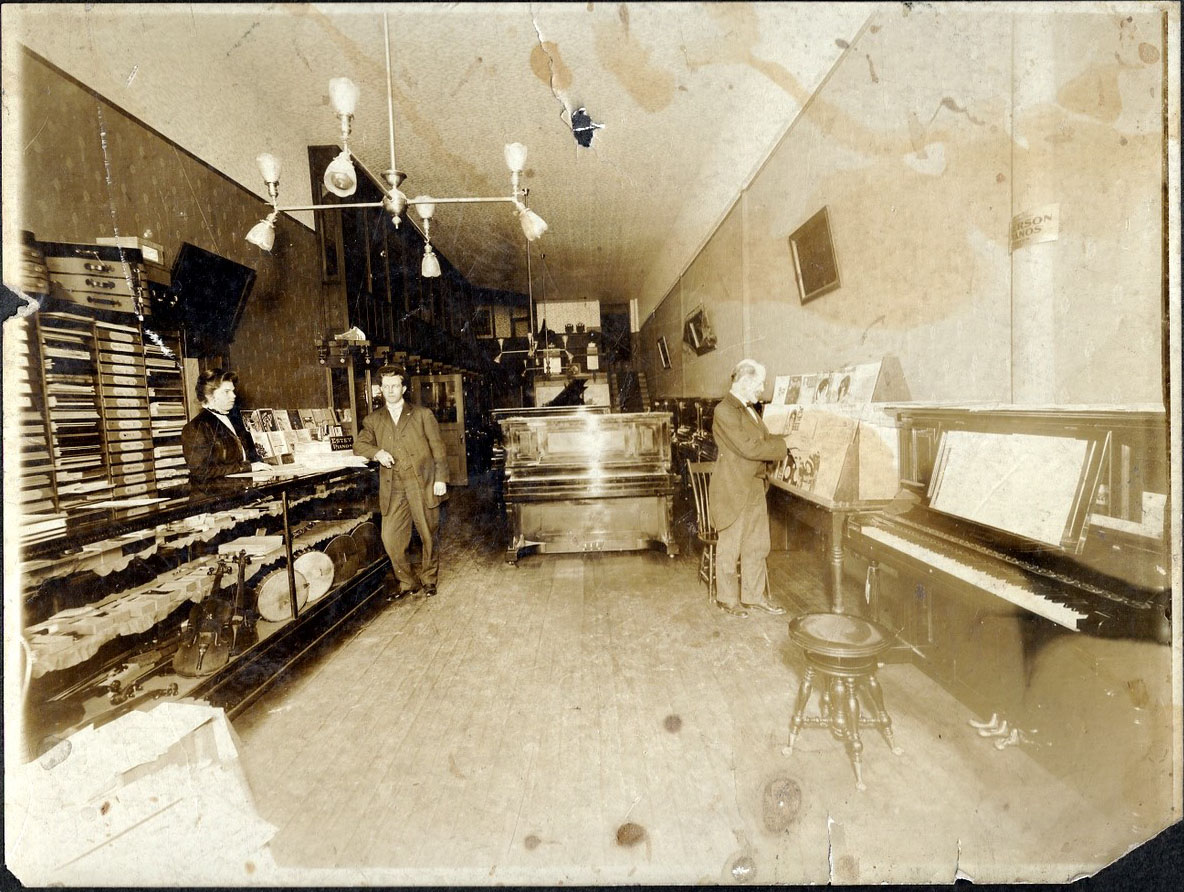 May 11, 2016 By command Comments are Off Announcements, Historical Society

Music store in Centerville, South Dakota  in the early 1900’s. 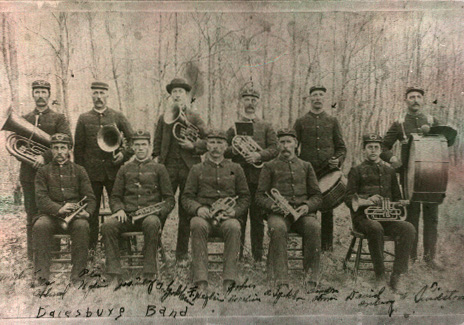 September 25, 2015 By command Comments are Off Announcements, Local History

“Dalesburg Band History Goes Back to Early Pioneer Days” by August Peterson
The Dalesburg band, which was organized in October, 1887, claims the distinction of being the first rural band organized in South Dakota, and what was then Dakota Territory, and the claim will not be seriously disputed. Tuesday evening, July 21, the band celebrated its 44th anniversary in Dalesburg at the bandstand, and the feature of the evening was the rendition of the first selection the old band gave at its first concert in the Dalesburg schoolhouse in January, 1888. During the anniversary program Fred Heglin, the first leader and director of the band, gave a comprehensive and interesting history of the organization, telling of the first inspirational impulse of the young men of that day to start a band among the farm boys, the hardships incident thereto as compared with today, as well as some of the humorous occurrences in that connection. Stress was laid on the comparison of 44 years ago with today, by saying that it was a common thing in those days to hear “out-of-door voices a half mile away, passing along the trails hauling building materials, returning home from neighbors, threshing, and walking with a pitchfork on the shoulder after the day’s work was done, or even the man and wife with a milk pail on their arms, going to do the milking; to hear people sing or hum a tune of folksongs, national airs or religious songs, the atmosphere seem surcharged with melodious contentment, while today when folks go out on the highway, they sit like bull frogs at the steering wheel and are mum.

“The 10th of October, 1887, may be said to be the birthday of the Dalesburg band.” Mr. Heglin said, “and how eager the boys were to feast their eyes on their first instruments, consigned from Lyon & Healy, Chicago, and hauled from Vermillion, was related by him, replete with humor and not a little pathos. Failing to find a hammer in their hurry to open the box in which the instruments were packed, they used his mother’s stovepoker, which broke in the attempt and after each one of the boys had made his initial trial on his instrument, she pronounced the bass drum as the finest instrument of them all, all the time lamenting over the broken stovepoker.

At the band’s first concert 44 years ago, there was a well-known young lady with a most pleasing voice who sang a song of youth, depicting the usual aspiration of life’s springtime. Last Tuesday evening at the band’s anniversary program this same lady sang ” When You and I Were Young Maggie.” The young lady referred to was none other than Miss Lizzie Ostlund, while at Tuesday night’s program she was Mrs. Fred Heglin, and to the astonished gathering of people who had come to pay their respects to the old band and leader and to enjoy the evening’s entertainment, the lady’s voice had lost none of its former charm, while a close observer might have detected a slight trace of pathos as the words, replete with life’s full meaning lent themself ready to the occasion.

Rev. C.J. Carlson, who was pastor of the Dalesburg Lutheran church and had just resigned a short time previous to the organization of the band, had expressed a wish to hear the band play before leaving the community. It was therefore arranged that the band, unknown to Rev. Carlson, go and serenade him on a certain evening shortly before his departure. Mr. Heglin related that the evening was very cold and as the band boys had not yet fully become accustomed to their new instruments, they knew nothing of the effect the temperature might have on their musical prowess. But there was also during that period, Mr. Heglin stated, the all-absorbing interest in the famous Indian chief, “Sitting Bull,” and his interference in the peaceful pursuits of the Dakota settlers. The papers at the time were full of stories of the Indian chief, and cold shivers went up the back of every homesteader throughout this region. When at last the band serenaders arrived at the parsonage, proceeding as quietly as possible for best effect, and having cautioned each other, no doubt, in making their most supreme effort to please the parson, imagine their surprise when, upon the word of their leader to play, that not a sound could be heard from any of their instruments with the exception of the drums. The rest were frozen up and Mr. Heglin said “they blew hard enough to take the top of a haystack off, without a sound emitting from one of the horns.” They had frozen, and only the monotonous beats of the drums were heard on the cold wintry night air while Rev. Carlson instinctively suspected the visitation of the famous “Sitting Bull” and his cohorts. After a short parley, the boys were invited to come in, thaw out their instruments, and they duly entertained the minister.

During the first winter, after the band had organized, the winter of 1888 with almost impassible roads and trails because of the heavy snow, it wasn’t uncommon for the band boys to wade through miles of from two to four feet of snow in going to and from their band meetings to practice. Hardship seemed to stimulate them to new efforts.
During the corn husking season of 1893 Emanuel Johnson, who arrived from Sweden that spring, was working for Jorgen Nelson, in Lodi. He had joined the Dalesburg band and in going to a band meeting at the Fred Heglin home one evening on horseback, the overflow of the bottom caused he and his horse to lose footing while crossing the bridge below the bluff on this side of the river. His tenor horn was lost in the tumble, the water reaching to the flank of the horse. But he recovered the horn, stopped at a clump of plum bushes to dry his clothes, and was on deck at band practice as though nothing had happened.

The members of the old band as first organized were as follows: Fred Heglin, leader and director; John E. Norelius, Andrew Lyckholm, Joseph Inberg, John Heglin , Chas. Hoyer, Peter Heglin, Emanuel Norelius, Andrew Strom and Oscar Sundstrom. So far as known, six of the original members are still living and Joseph Inberg is yet an active and valuable member of the present band. Fred Heglin, up to a few years ago, took active part in the band and on various occasions, even though not a resident of the community, lent his aid and best efforts for its continued success. Oscar Sundstrom, of Beresford, was present at the anniversary program and took part in the rendition of the first selection played by the old band, and by the generous applause rewarded them by the assembled multitude, numbering about 1,500, it is evident that people yet enjoy old-time music.

Throughout the 44 years of the band’s history. Mr. Heglin related, there were periods when the organization barely functioned, while at other times it would flourish to the great satisfaction of its founders. Not long after the band’s first entry as a rural musical organization, one member dropped out and in his stead, young Charles Lyckholm was substituted. He was then but a youngster in his “teens,” but owing to his great interest in music, it did not take long before he was the most accomplished player of them all. It was said that when young Charlie was first permitted to take the instrument home, it created not a little commotion, in that his father objected to the music discourse because he could
not sleep and accordingly the young musician was forced to find refuge down by the creek which ran along some distance from their home. But the worst was yet to come. Not being accustomed to the entertainment of such variety of music, the cattle stampeded and broke through all the fences of the farm, compelling his father to repair fences for days afterward.

The following year (1888) the band was engaged to furnish music at the midsummer picnic, held at the Hans Ostlund farm at Clay Point. As the whole countryside was even then accustomed to attend those gatherings, one may surmise that the band felt not a little proud of showing its accomplishments in the musical field. The leader, Mr. Heglin, asserts that the fact that a young man of that day being a member of the band, contributed not a little toward everyone in the organization entering the matrimonial harvest shortly, and adds that if the present band plays the proper kind of music, no gloomy bachelorhood need hamper the future environs of the Dalesburg band. There lived in that community at the time, Jonas Johnson, a well-known substantial citizen, who attended the band’s first outdoor concert, perhaps with some slight misgivings as to its musical value and entertainment. When the band had played its best selection, designated, Mr. Heglin states, as No. 2 in the beginner’s handbook, Mr. Johnson proudly marched up and volunteered that if the band would play that piece over again, he would give a $10 bill to the organization. Of course it was triumphantly repeated and the band’s treasury was duly enriched to that extent, and it was the first reward received publicly.

In the concluding remarks of the old band leader, Mr.Heglin stressed the value and advantage in having a musical organization such as the local band, and urged the people throughout the community to actively lend their moral and financial support. It furnished entertainment during its bi-weekly concerts which, if you should go elsewhere to enjoy, would cost at least a dollar per family in gas, oil and sundry items. The amount could as readily be given the local band instead, and at the same time stimulate community interest in numerous ways and for the benefit and enjoyment of all. His concluding message was: “Back them up by words and deeds and may the Dalesburg band have many more anniversaries with increased ability and service.”

As a mark of courtesy, Mr. Swedling, the present leader of the band, handed the baton over to the old veteran band leader, who led the band in the two concluding selections, which gained fresh applause from the appreciative audience. At the close of the program, various individuals expressed their thanks by substantial cash donations, one being a contribution of a five dollar bill from Emma Swedberg of Vermillion, as announced from the bandstand, and contributions by others in lesser amounts. Willard Danielson, manager of the present organization, announced that the next concert will be given on Tuesday evening, August 4, at which time several special selections will be rendered, and he assured the audience that this concert will be outstanding in several particulars and well worth attending.
Notes: The homestead of Hans and Martha Ostlund was located at 30962 University Road; or the Northeast corner of the intersection of University Road and Clay Point Street; or in the North Half of the Southwest Quarter and the North Half of the Southeast Quarter in Section 5, Prairie Center Township, Clay County. Lizzie Ostlund Heglin was their daughter.

For information about the firm Lyon & Healy in Chicago, visit: https://en.wikipedia.org/wiki/Lyon_%26_Healy 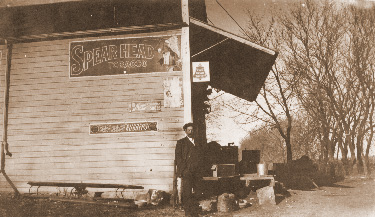 January 12, 2012 By command Comments are Off Announcements

Reprints of the book History of the Swedes Who Settled in Clay County, South Dakota and Their Biographies by August Peterson (1947) are now available.